If you are one of my friends, you’ve probably boosted part of your wealth tenfold by now! For those who are active in the economic field, such a profit can be considered a masterpiece!

I decided to write this blog since Bitcoin reached over 60,000 because after Black Thursday, I’ve promoted investing in Bitcoin among those around me, so that many have saved my name Alireza Bitcoin in their phone contacts and every time they see me, ask about cryptocurrency. I bought my first bitcoin for $ 6,000 and that was the reason why I posted this photo on my WhatsApp status when the big green candlestick closed on October 15th. 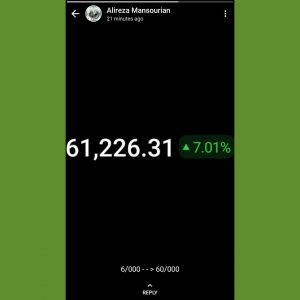 These days I’m very busy with my projects for November and December. I briefly named these two months Moonember because these last days of the year I am working hard on two big projects that may reach the Moon.🤣 However, today, something drew me from my honeymoon with Moonember to the keyboard and lovely MansNotes. If you, like me, remember the $ 300 billion Coin Market Cap, you must have been thrilled to see the $ 3,000 Market Cap. Today, the ATH was acquired, and now the market value of blockchain technology is greater than that of Microsoft, the world’s most valuable company. By the way, overtaking Microsoft from Apple made me just as happy. 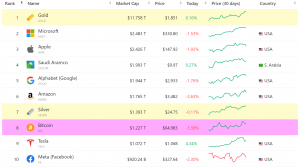 Overall, what happened in economics within the last month made me all happy the most important of which was Elon Musk surpassing Jeff Bezos and, more importantly, Musk earning the title of “the richest man in history”. Explaining my reasons for this happiness requires another blog; a blog that I’ve written since Amazon’s CEO had retained the top spot by a wide margin. This blog entitled: “The Importance of being #1“ is the first post I saved in the MansNotes draft, and I probably would have liked it to be my first blog post. Anyway, I’ll definitely publish it one day and perhaps the only good thing about this delay is that I no longer have to wish for Musk #1 at the end of the post after paying my respects to Jeff Bezos. From that post, I can only include in today’s blog that Cryptocurrency and its loving community now have the support of the richest man in history. A support that even the legendary Rockefeller cannot do now. The support that the cryptocurrency community now enjoys is at its peak when it soon becomes clear that its biggest sponsor has become the first trillionaire in history due to his pocket full of Dogecoin.

That time, the Coin Market Cap was so small that if only a few Forbes billionaires wanted, they could buy it all (i.e. they could have left crippling effects). But the situation has completely changed and in my opinion, cryptocurrency is now in the Slope of Enlightenment stage after coming out of the early stages of the Hype Cycle. Cryptocurrency is ambitiously and rapidly advancing towards the Plateau of Productivity. Technology has never gone through these stages at such a rapid pace. This acceleration goes back to human progress in the 21st century, and I can say that subsequent technological revolutions will go through these stages even faster.

Simply put, I mean, from now on, the Bitcoin chart behaves like the very valuable Wall Street stocks. In my opinion, Bitcoin is like Amazon shares a few years after the Dot-com bubble calmed down. To understand what I mean, look at its chart.

Some say that Bitcoin is set to become a replacement for gold. I agree but not so soon! This goal may remain out of reach until at least February 2140. However, in the meantime, Bitcoin has the potential to bring its market cap value to gold and even surpass it. I say this because bitcoin is really better than gold in almost every aspect. The only significant advantage of gold over Bitcoin is its thousands of years of history in financial transactions. Gold now has the most valuable thing in the world more than its rival, and that is “time“, and other things are completely in favor of Bitcoin. I’ll explain the many reasons for this in another blog, but the most important is that Bitcoin is a better tool for transferring and maintaining value for 2 important reasons:

Note that all these discussions were done in comparison with gold, otherwise I believe that as blockchain and the cryptocurrency market mature, the use of bitcoin as a payment method should end as soon as possible. In my opinion, the future should treat bitcoin like gold. They should use it more for hedging. Countries and companies that accept it should gradually consider adding other options e.g. Elon Musk’s Dogecoin! Yeah! Dogecoin can be really good for payments, especially with the adorable updates it gives (today it released update 1.14.5, which made the fee even lower than before).

Bitcoin has some interesting fundamental news. The important and transformative update of Taproot is coming. Inflation in the US is unprecedented in the last 31 years. Cryptocurrencies are gradually being adopted by companies and funds as a means of transferring and retaining value. Therefore, it is predicted that the market will remain bullish, especially as it gradually becomes obvious that more billionaires have bitcoins. Surely they are smart enough to buy some of it in the past in order to diversify their portfolio, even if they don’t believe it. Cryptocurrency is one of the best asset classes for portfolio diversification. I’m sure even the fanatical Donald Trump (fanatic to the US dollar) has some of that. As I’m sure that they have all invested in the space industry in various ways. Today, the hand of one of them was revealed. Apple CEO, Tim Cook, also owns bitcoins. I like his work, but not his being so much conservative!

In this bull market, don’t forget the altcoins, especially my favorite token Shiba Inu, which is the real people’s money. Dogecoin is the best coin for financial exchange, but as long as Ethereum’s fees are reduced, or at least Shiba Inu launches its own blockchain. 😎

The “blockchain revolution” is what Bitcoin did to us. Satoshi Nakamoto’s White Paper is like poetry. Before that, I just remember enjoying Sohrab Sepehri’s poetry so much. Take a look at it! My devotion to Bitcoin is not limited to the T-shirt I wore at Guinness Event on September 1. My kith and kin know that at that time, I loved cryptocurrency and admired bitcoin so much that I even sold my car to invest in it. But I strongly advise you to never do that! Actually, you should not sell your car for any investment unless love upsets the balance.

In the end, I hope you are one of my friends who started buying bitcoins with me. Because in this case, you are one of the few investors who have done this in the best time within the last 4 years. If you have been on the Iranian stock exchange and acted on my advice to leave this market in August 2020, I must say that you may be the real Wolf of Wall Street. Haha!