You can purchase the book Covid Acts of Kindness from the world’s largest retail website. The book, which won one of the Guinness World Records, is now being released by e-commerce giants to people around the world.

Finally, after months of round-the-clock effort, I can say that the work on this book is over. When I was offered to participate in this huge project, I did not even think that it could be such a difficult project. Its difficulty was due to two major reasons. First, it was determined from the outset that the book would be dedicated to future generations, and second, there were vocabulary restrictions on presenting the contents.

As a writer, it was a little harder than expected for me to present content that was timeless and at the same time short and concise. As I was writing, I had to think about how my grandchild’s grandchild would understand what human beings were going through in the 21st century when reading this book; would I convince him that humans need to change something, or that his ancestor is a writer who has been buried in the pursuit of an ancient message for many years?!

In my opinion, writing content that is useful for contemporary people and inspiring for future generations requires a great deal of delicacy. Because I think something that can inspire future super-advanced societies is hard to find useful for our relatively backward society. That’s why I didn’t limit my words to COVID-19 or climate change (which may be the next crisis). Actually, I tried to create this delicacy by generalizing my words to all crises. As I was writing this, I saw myself as a remnant of a crisis, which does not fundamentally matter what date belongs to.

I wrote it in speech format and considered myself its speaker who considers his audience to belong to the future; those who are related to our dreams. In fact, despite my efforts to deliver a good speech, I wish that they would never need to attend this speech in the modern alleys and by-lanes that are drowned in peace. I wish all of them memorized the words of this glorious speech (!).

I mentioned COVID-19 only at the end of my content. You can read the final part of it in the following section:

Like all other crises, COVID-19 will change the face of history, a face that will never be the same again. This face tells the story of the deep connection between man and nature. It is the story of the butterfly effect.

This time around, we, the current occupants of planet Earth, have been called to play the hero’s role during the crisis. Just as the Berlin Wall fell, present-day barriers will crumble, and our acts of courage will help us win the battle for adaptation. Kindness can be one of our most significant acts of courage, the effects of which will be felt for eternity. These are our Covid Acts of Kindness.

This text is written on the cover of the book.

THIS IS A BOOK FOR THE FUTURE GENERATIONS TO KNOW HOW PEOPLE OF DIFFERENT AGES, BACKGROUNDS AND ETHNICITIES AROUND THE WORLD KEPT HUMANITY ALIVE DURING COVID.

I thank the esteemed publishing company, North Star, and the father of Iranian genetics, and I congratulate all the authors on this great and global success. Professor Dariush Farhoud has written a beautiful introduction to this book and a chapter of it belongs to me. 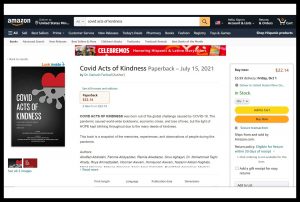 Click to purchase it in Iran. There is still no cheaper method available for Iran. Other methods will be announced later.

2 thoughts on “Order now from Amazon!”