We are going to do humanitarian actions utilizing the world’s most advanced technologies. Globally, this is the first NGO on the Metaverse platform, which is the crossroads of 4 modern technologies in the world.

In my opinion, in this decade, the world of technology is moving towards 4 technologies: virtual reality, artificial intelligence, 5G internet, and blockchain, which are expected to change our world forever. Using these technologies, Metaverse will gradually become another service from technology that is supposed to make human life something that bears no resemblance to the past. Its revolution is like social media; one of those revolutions that, when combined with your daily life, you can no longer imagine your life without. Don’t you think that life before 2006 was too boring?

From the beginning of 2021, I wanted to start a nonprofit onganization on the Metaverse platform whenever my workload decreased. But, the COVID-19 pandemic made things harder for many people around the world. In the last three years, Iran’s population below the poverty line has doubled and it is estimated that 30 million Iranians are in absolute poverty. The situation of some other countries is not much better than Iran. This statistic is very worrying for the people of the world. So, I spent some time researching charities and NGOs. They face a shortage of resources and limited international activities, especially in Iran. Most of them are managed in the traditional way and almost none of them are technology-driven. This is a global problem for NGOs and a very limited number of them are creative. Metaverse is a world where creativity has no boundaries. That’s why it’s a good choice.

Initially, I estimated the cost of setting up an NGO with special creative features on the Metaverse platform to be $ 10,000. But something unexpected changed the predictions. On October 28 (less than a month ago), Mark Zuckerberg changed the name of Facebook to Meta, which made this technology popular. So, the technology that I used to introduce in my meetings with my brothers as the new version of social media in the medium term, now has been chosen by the world’s number one social media as the most important roadmap for staying in the market. This multiplied the price of Metaverse-based tokens and, as a result, made all of our estimates difficult. I’m glad that the public mind is preparing for the Metaverse revolution sooner than I had in mind, but I still believe that Zuckerberg unveiled a project he was researching and developing earlier to save his company name and stock. In my opinion, the unveiling of Meta is affected by the disruption of Facebook on October 4. On that day, people worldwide witnessed a widespread disruption in the uptime of Facebook and its subsets, which even took several hours to solve for this company. Several hours for all these social networks is like Benz not producing any car for 6 months because even its engineers cannot take control of the production line. Time on the Internet passes much faster! Otherwise, I think, perhaps nothing would have persuaded Zuckerberg to unveil a project that should have been unveiled earlier than the time of 5G maturity!

Although the cost exceeded $ 10,000, we’ve done it! Here is “MaNgo”! Much of this investment was made by myself and the rest by my two older brothers and I appreciate them here. The main source of income of this NGO is through the sale of NFTs using the ERC721 and ERC1155 protocols on the Polygon platform. Its revenue will also be based on Ethereum in Polygon. The MaNgo team intends to use Dogecoin and Shiba Inu as payment methods. The beta version of MaNgo is now available in The Sandbox, which will be upgraded to a higher version in the winter of 2022. This upgrade in the NGO roadmap will be done by expanding the services provided by this company, as well as building games on the Metaverse platform. According to the company outlook, we’ll achieve its upgrade to the main version by increasing the members of this NGO and placement of MaNgo on other platforms.

In fact, Mango is the name of the animal symbolic of this NGO; a dog of the Shiba Inu breed that is going to receive financial resources through the Metaverse window by selling products and providing services and to become a hero by donating it to the needy in the world. For now, he intends to start with small steps. In the initial steps, he is going to donate 50% of the aid directly to his peers and the working children of his homeland. Mango NFT is now available for sale on the OpenSea platform.

The idea of creating the MaNgo brand is funny, at least for me. It consists of the words “Ma” and “Ngo” and altogether, it means a delicious tropical fruit. But the point is that I wanted this brand to start with the first letters of my name (Alireza) and my brothers’ names (Mohammadreza and Bahador) as the founders of the company. M’s appearance has been designed like the first letters of Mohammadreza and Bahador (like a horizontal B). That’s why I used “Ma” before “Ngo”. In designing the brand, we also tried to use the mango tail, Ethereum symbol, and the 50% direct donation. But the interesting is that I used a linear slope for Ma, which is equal to the difference between my and my brothers’ height in childhood. I obtained it exactly. Its angle is 31.4 degrees, which also surprised me with its similarity to the number π! 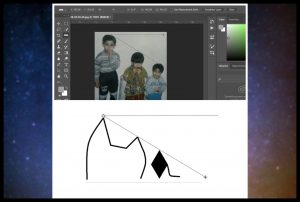 MaNgo is currently located in The Sandbox Metaverse in cartesian coordinates (90,89) and this decentralized land itself is also an NFT. In other words, MaNgo is an NFT that sells NFT. MaNgo is not going to be just a brand of modern charity. It is set to become a culture by spreading smarter thinking to the world of Metaverse. The company’s mission is to produce value, provide services, and directly donate 50% of its revenue to the charity. Visit the website of this smart and shy animal to find out what the hero Mango does with the other 50% of its income.