Writing a book with the legendary Brian Tracy can be the dream of any writer. We’ve done it! Here is Rise Above Adversity. This is the name of my joint book with one of the most famous and best-selling authors in the world.

For years, I’ve written scattered notes on my cellphone, tablet, and laptop, the ideas behind which are a bit humorous and at the same time very opportunistic. In many cases, they bombard you, especially where you think they are joking. This may not always be the case, but when you have no weapon to record, you can be sure that they are very opportunistic.

If your mind is constantly bombarded, I’m sure you know what I’m talking about. It’s like a never-ending explosion. All the time. You are probably a person who may sometimes shock or even upset those around you with your behavior. When your friends are busy talking about the trend of college (i.e. attractive female freshers), you may turn your pen and start scribbling on that damn screen. It has often happened to me to ask the pool buffet keeper for a pen and a plate. Don’t laugh! I write my ideas using them! First, I put the plate on the table, then dry my hands, gently pick up a tissue paper, put it on the plate, and start writing. Finally, I ask for a plastic bag. The buffet keeper thinks that I’ve requested it to pack the pen and plate, and gives it with a surprised face. I tightly wrap the tissue paper in the plastic bag to protect it from any moisture penetration. Some buffet keepers should have been a comedian. Some of them who are my friends jokingly bring me low-calorie sauce in the middle of writing. They are funny anymore!

Actually, until a year ago, a seemingly unsolvable problem with these ideas had occupied my mind. When looking at them, there was a string of ideas that didn’t fall into any category. Neither of them could be included in my inventions, nor great and money-making startups, nor the website, nor any of the other 7 items! They encompassed more science and were essentially a combination of several subjects. For example, about one of them, I felt it was the result of my childish thoughts while riding my very small pink bicycle (which is always a question for me why it was pink!) in the by-lanes of Ilam, My mother’s soothing words after the dictation that I got a score of 12 (out of 20) in the second grade of elementary school, the dialogues I memorized to play in the movie Wheelchair, and one of the paragraphs in the book Elements of Nuclear Physics by Meyerhof that was indirectly related to Schrödinger’s cat. Many of my ideas are like this! For this reason, contrary to many, I’ve always believed that all the lessons we’ve studied, as well as all our experiences, will be useful one day.

One day one of my friends who always praised my writing showed me a video on YouTube. That video was a call for co-authors in Brian Tracy’s new book, co-published in December 2021 with North Star and Brian Tracy International. They asked prominent entrepreneurs, writers, and students to help Brian Tracy write an important book by submitting a resume and after several interviews. The book has aimed to be addressed to people who have many problems in life and have sought refuge in the book in search of a revolutionary solution. After some research, I realized that Brian Tracy has recently become very interested in philosophy books and loves the Aristotle books he has just read. Out of curiosity, I read the Nicomachean Ethics and consequently, the answer to that unsolvable problem of my ideas suddenly came to my mind. Maybe they are related to philosophy!

Brian Tracy’s interest in philosophy opened a window of hope for me to work with this exceptional writer. I decided to send my resume and submitted it with no fear of the result. Then, I was invited for an interview and told them about my notes over the past 23 years and tried to explain to them how those ideas have shaped the mindset that has helped me rise above adversity. After a relatively long time, the result was determined and they sent me this certificate. 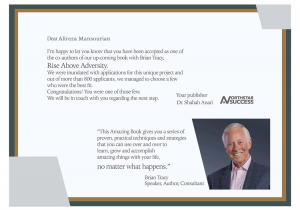 It is very difficult to describe how happy I was to get this position. From reading his book, Speak to Win, I learned that he was a consultant of the IBM Company (the company that built the world’s first computer). I always saw Brian Tracy’s books in my father’s hands. My father read it in the 2000s when his field of work was more trendy in Iran. I remember we had at least 3 copies of Eat That Frog! (This was also true about the Secret). I’d like my father to be the first to hear about this. That night he said important things to me on the phone.

This event, about a year ago, was the beginning of creating a text called “Think Smarter!” that I even had to travel several times to write it. This text, with the help of game theory and the description of several new technical terms, is the basis for a new kind of thinking that I called “Smarter”. After completing my text, on the advice of experts, I decided to introduce ideas related to this way of thinking as the Thinking Smarter school of thought. There are so many descriptions of this book that it requires more blogs. But just to get acquainted with the chapter I wrote, I must say that it has 3 headings and several keywords as follows:

I sincerely thank North Star and Brian Tracy International companies. They also published a professional bio of me at the end of the Think Smarter chapter. The idea generation, writing, and editing took at least 9 months, and finally, we’ve done it! Here is Rise Above Adversity! You can purchase it now from the world’s largest shopping website. The book was officially available to the public on November 21. This is the second book by me this year on Amazon. Click to purchase.

I wrote this book in 2021 at the age of 23. I remember before writing it when I talked to Amir Bahador about ideas related to it, I told him that I want this text to cover at least 90% of what 23-year-old Alireza thinks is important in life. I said I want to relax after writing it. Despite the fact that during the writing, editing, and page layout, I deleted nearly 2,000 words against my will, but after finishing it, I told Amir Bahador that I feel I’ve fulfilled my task. I said that even if I do nothing from now on, I’m still happy that I’ve recorded some of my knowledge somewhere for human beings, no matter how complete they are. I had this feeling to a lesser extent after my first book. Now that I think about 2021, I can only remember sitting at my laptop for hours and traveling.

Hard but sweet moments! Good projects came up. I developed MansNotes this year. I wrote Covid Acts of Kindness and attended Guinness World Records shortly afterward. I founded MaNgo with the help of my good brothers and I’m proud of it. But…you know, those were good projects. I like those projects a lot, but especially, I like the new projects.

Footnote 1: In Motown 25, Michael Jackson is 24 years old. He first performed 4 songs on stage with his brothers. But he performed the fifth song alone. Michael Jackson used moonwalk for the first time in this performance, which amazed all the spectators. After that, Michael became a global figure, and thus Billie Jean’s first performance changed the history of world music forever. Click to see the full performance.

Footnote 2: Today is the anniversary of President Kennedy’s death. He was assassinated on November 22, 1963, in Dallas, Texas. God bless his soul. 🖤